Posted on June 29, 2022 by theplainspokenpen@gmail.com 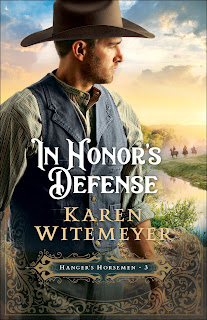 He’s Faced Countless Perils on the Battlefield, but Nothing so Dangerous as Falling in Love.
Luke Davenport has been fighting all his life–for respect, for country, and for those unable to fight for themselves. But now that his Horsemen brothers are domesticated, he’s left alone to battle the wildness within. When an opportunity arises to take a job on his own, tracking down a group of rustlers, he jumps at the chance.
Damaris Baxter has mastered the art of invisibility. Plain and quiet, she hides in books and needlework, content to be overlooked. Until her brother dies suddenly, leaving her custody of her nephew. She moves to Texas to care for Nathaniel, determined to create the family for herself that she never thought she’d have and to give him the family he desperately needs.
When Nate finds himself knee-deep in trouble, Luke’s attempt to protect him leaves Damaris feeling indebted to the Horseman. But suspicions grow regarding the mysterious death of Damaris’s brother. And the more questions they ask, the more danger appears, threatening the family Luke may be unable to live without.
CLICK TO PURCHASE!
│Baker Book House |

This is my first book by Karen Witemeyer that I’ve read, and I think we have the start of a beautiful friendship here! I simply adored the story, the characters, her writing style, everything. Action, mystery, romance, family tension, this one has it ALL.

Quiet, bookish Damaris Baxter often felt overlooked and invisible to everyone except her older brother. She seldom saw him, though, because he’d moved away to Texas. When he dies suddenly, Damaris learns that he named her as guardian of his son, her nephew, Nate.

Luke Davenport’s upbringing was rough. He grew up with violence and anger around him, but he didn’t let it define him. As part of Hanger’s Horsemen, he’s been able to help right some wrongs. The Horsemen are settling down, though, and they’ve all found a place to rest except for him. He figures on a nomadic life…until he encounters Damaris and Nate.

Damaris isn’t your typical romance heroine. She’s nerdy (yay for the book nerds!), reserved, of average pleasing looks. She started the book out nervous and scared about a lot of things. She had to steel herself to jump into situations that needed jumping into. She isn’t drop dead gorgeous or super confident. But she’s real. I could relate to her as she tried to figure out how best to help Nate deal with his father’s death and how to show him that trouble wasn’t the path he wanted to choose. She jumped headlong into a new life in Texas to help the nephew she loved, and it was a delight seeing her grow in confidence and in wisdom as the book progressed.

Luke wasn’t the perfect hero, either. He’d had some difficulty in his life. He doubted himself, doubted whether he was meant to ever have things easy. But he kept on trying to do the next right thing. When he saw that Nate was running headlong toward trouble, he stepped in to try to redirect him. He didn’t hesitate to jump into a fight when the cause was just, even at great risk to his own safety. And he wasn’t going to let Damaris go it alone trying to learn more about her brother’s death in mysterious circumstances.

The secondary characters were also nicely fleshed out. Dr. Jo was one of my favorites. Witemeyer writes her women capable and strong, even if they don’t realize it at first. It’s nice to see female characters in historical fiction who don’t necessarily abide by the expectations for women in their time period. And Nate was so very teenage boy! I liked seeing how Luke and Damaris never gave up on him, even when he was determined to fling himself headlong into trouble.

Faith was a vital part of the story for both of our main characters. Luke relied on Scripture in every situation. I should have so much knowledge of the Bible tucked away in my heart. Prayer was a regular part of their lives, and trust in God was essential. The romance was clean. Luke and Damaris were notably careful not to put themselves into situations where temptation might overcome them, and their relationship had time to build.

Rich in faith and love, with good guys to cheer for and bad guys to boo and hiss, In Honor’s Defense is everything I love in a good book. Five stars, and I can’t wait for my next Witemeyer read!

Scroll on down to enter for a chance to WIN all three books in the Hanger’s Horsemen series, including this one!